Story and Photo by Jake Hartvigsen

as published in SCENE magazine, Feb 2015 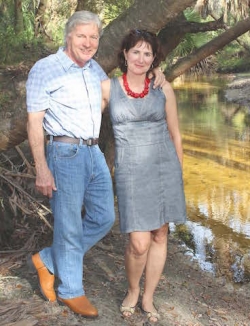 Sitting on the porch of Rob Patten’s and Babette Bach’s rustic cabin along the Myakka River, you can’t help but feel that you have been transported back in time.

Cabbage palms twist and arch their way skyward as they stretch for light through a forest canopy created by centuries-old live oaks. Overhead, a great blue heron swoops past, while just beyond the tree line a deer moves silently through the underbrush.

And then, of course, there is the river. Crystal clear and burnished gold in the late afternoon sun, it meanders along sandy banks toward a final destination in Charlotte Harbor and the Gulf of Mexico.

This is a picture of Old Florida that some only experience through the photography of Clyde Butcher and other artists, yet for Rob and Babette it is a living reminder of the natural beauty that exists in southwest Florida even beyond our world famous beaches. Their commitment to preserving ecosystems like this for future generations is why they are so passionate about the work of Conservation Foundation of the Gulf Coast, a regional land conservation organization.

“I grew up in the wetlands of the St. John’s River near Jacksonville,” says Rob, “so I understand how special Florida’s natural environment is. Yet, because of that experience, I also understand just how fast that environment can be changed and lost forever if there is no one trying to protect it. That is why it is so important to have organizations like Conservation Foundation of the Gulf Coast.”

His knowledge about the value and importance of environmental preservation extends far beyond childhood memories. In the 1980s, he helped form Sarasota County’s natural resources department, building programs to establish local parks and replenish vegetation on coastal beaches. Then, after launching a successful environmental consulting firm involved in large-scale habitat restoration for clients that included The Nature Conservancy and National Audubon Society, he returned to Sarasota County government in the late 1990s to head its environmental sciences division.

During that time, he also met Babette, a local elder law attorney who had recently lost her husband. With a shared love for travel and the outdoors, the couple immediately hit it off. “Rob and I both see environmental protection as something that you do not only for your own current enjoyment, but so that your children and grandchildren can benefit from the beauty and the experience of the outdoors as well,” she says.

That belief in the importance of creating an environmental legacy for future generations of Floridians is something voters, both locally and statewide, have endorsed overwhelmingly through the years, including this past November with the passage of Amendment 1. It is also a key reason behind Rob and Babette’s support for Conservation Foundation.

“Because it is a private nonprofit organization, Conservation Foundation of the Gulf Coast can do things in a way that local governments can’t,” says Rob, who has served on Conservation Foundation’s board since 2008. “For instance, we have far more flexibility in establishing partnerships and negotiating contracts than a government agency would. We also can work more creatively with landowners to preserve and protect their property through estate planning and conservation easements.”

As an example, he points to current negotiations with the land- owners of three separate parcels surrounding Myakka State Park. Once completed, the easements will connect the park with the Crowley Preserve in the north, create an environmental buffer for the park’s campground in the west, and help protect a key water source for North Port’s water supply in the south. All will be accomplished while allowing the current property owners to maintain their ownership.

“Preserving and restoring the environment is about more than just saving trees or protecting certain species,” says Babette. “It’s about understanding nature as an integrated system and realizing that the actions we take today will impact our quality of life for generations to come. That is what Conservation Foundation of the Gulf Coast is all about.”