Saving Florida, one Person at a Time

as published in SCENE magazine, Feb 2016 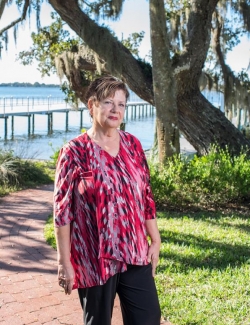 "The environment needs our help," says Patience Johnson, a long-time snowbird from Maine and a recent full-time Nokomis resident.  "We're so lucky to live here in the United States where we have the opportunities that we have. Appreciation is a huge word for me. I always look for ways to give back."

She has good reason to be concerned about the level we’re caring for the environment. Over the next 25 years, the population in our region is expected to grow by almost 40%. And the Conservation Foundation reports that nearly 2.7 million acres of native habitat will be lost to roads, shopping malls, and subdivisions within the next 45 years. It’s a concerning situation, to be sure, but there’s hope.

Back in Maine, notes Johnson, they have the Land for Maine’s Future program. Ongoing for nearly 20 years, it set aside to purchase and conserve land for future generations. To date, over half a million acres of conservation and recreation lands have been protected along with 54 water access sites, 24 commercial working waterfront properties, and 40 farms of more than 9,700 acres.

“I thought that’s what was happening here, too,” says Johnson about Amendment 1, the Florida Water and Land Conservation Amendment, which will generate about $750 million in bonds this year, a large portion of which was intended to buy environmentally significant lands. “But that’s not the case. It’s disconcerting. When 75% of the people vote for something to be done, it should be done. And Amendment 1 was supposed to protect our land.”

Yet she’s not sitting back and hoping someone else will do something or trusting that the politicians will eventually get it right. Johnson’s a person to step up and do what she can, and that includes stepping up to strongly support Conservation Foundation. “I attended a meeting of theirs five years ago, but when I moved here for good about a year ago, I called them up and asked, ‘What can I do to help?’

Since then, Johnson has made arrangements for a planned gift that will ensure Conservation Foundation’s work is supported long into the future. And her support doesn’t stop there. With 30 years in the real estate business, eight years of service as a county commissioner, and her background in volunteering, Patience Johnson is a most welcome addition to the work of saving natural lands forever.

Giving back is Johnson’s philosophy. Add in her love for nature, and her partnership with the Conservation Foundation - as a financial supporter, an advocate, and a new volunteer - makes perfect sense. “If we don’t do something now,” she says, “lands will be developed without any planning about what should be saved. There won’t be any 150- foot buffer zones for natural habitats like we had in Maine. We should have more respect for what God gave us. Animals. Trees. Water.”

While Johnson finds ways to support other area organizations and causes - she’s a roving Ambassador at SRQ airport, and she volunteers for the Samaritan Counseling Group where they help underprivileged people get counseling, to name just two - it’s her appreciation for nature that she keeps returning to. She’s an avid supporter of Historic Spanish Point and she visits Myakka River State Park often. And she loves to roam the 2.25-mile boardwalk that wends through Corkscrew Swamp, a National Audubon Society sanctuary that protects one of the largest remaining populations of bald and pond cypress.

“More people come to Florida for the wildlife than to any other state,” says Conservation Foundation President Christine Johnson. “Our quality of life is a gift. We have an exceptional lifestyle because of our natural environment. We can’t forget that. It’s our cultural identity and our way of life.”

Patience Johnson explains, “I’m into preserving what I can help preserve.” She points to Palmer Ranch and how it was developed years ago. “It has such nice green space. If you drive down Honore or McIntosh, there’s so much green. You can see birds. You can see ponds. If you’re going to develop an area, that’s the way to do it. Respect the land and try to work with it.” Whether it’s advocating for better laws against reckless development or helping others find ways to help Conservation Foundation preserve land, she’s all in. “I’ve made a commit- ment to this area. I want to see a lot of green space. I want the natural habitat to remain.”

Perhaps the best way to reveal what Johnson’s about is to share this story. Her favorite part of the recent holiday season happened at a local Bob Evans restaurant. In line behind her at the register was a man whose body was failing such that he had a hard time walking. “He wore a veteran’s hat,” she noted. She turned to him and asked him for the bill for his meal so she could pay it. “You don’t have to do that,” the former soldier said. “I know I don’t need to,” she explained. “But I want to.”

That’s just how Johnson operates. She sees the opportunity to make a difference and then she seizes it.

With the help of concerned, dedicated people like Johnson, Conservation Foundation of the Gulf Coast is positioned to ensure that future generations will experience the rich beauty that Florida offers. That’s good news for us all.