Story and Photo by Jake Hartvigsen

as published in SCENE magazine, Dec. 2013 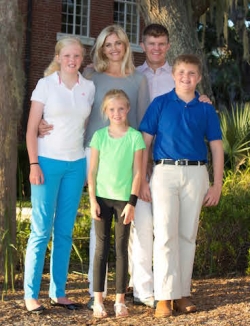 Dr. Harold Johnson says it was a natural fit when Albert Joerger, his old roommate from Cornell University and a former director with The Nature Conservancy, contacted him in 2003 and asked him to join a new land trust Joerger was putting together called Conservation Foundation of the Gulf Coast. After all, Johnson and his family had been enjoying southwest Florida’s coastal environment for three generations.

“I grew up sailing, fishing and enjoying everything outdoors with my parents,” recalls Johnson. “It was the perfect childhood, but it also gave me a unique perspective as to the ways in which we impact the environment around us. I learned that even little things can make a big difference.”

While Johnson’s wife,  Dr. Krista Toomre, doesn’t share his same deep roots in the local area, she is just as passionate about protecting the environment. “I grew up in Colorado with the mountains as my playground,” she says. “But to me, our shorelines are just as tranquil and special. Our goal, and that of Conservation Foundation, is to ensure that the same love of outdoor spaces we enjoyed in our childhoods is available to our children and others for generations to come.”

With assets of almost $30 million and a service area that covers Sarasota, Manatee, Charlotte and Lee counties, Conservation Foundation is an accredited land trust that has saved 8,600 acres on 31 properties stretching from the Manatee River in the north to Pine Island in the south. Its mission is to preserve open space and protect sensitive natural habitats, some for public use, while educating people on how they can help safeguard our precious natural resources.

It is a goal that just a few years ago many thought would be impossible to achieve. That is because while land trusts exist throughout the country, few have tried to operate in markets where the land is as expensive as it is along Florida’s Gulf Coast.

“People didn’t think it would be possible to protect coastal property in southwest Florida,” says Johnson. “But we are doing it, and we are doing it by working with developers, contractors and landowners because we believe in smart development. We realize that the draw for our communities is the beauty of our waterfront, and that in order to be the community we want to be, we need to preserve that character.”

A key element in accomplishing that goal is convincing property owners and developers to set aside conservation easements with Conservation Foundation. Such easements allow landowners to benefit from the value of their property while at the same time protecting it from unwanted future development. They can involve everything from limiting the size of buildings that can be constructed on a parcel to preserving certain sections of the property for specified uses. An example might be specifying that coastline must be preserved as open space for public use.

As for the future, Johnson and Toomre say they are proud of the legacy being created by Conservation Foundation. “You know, Conservation Foundation has only been in existence for ten years, but we are right on the cusp of making big strides forward, and a lot of that has to do with a change in culture. By creating a bridge between the public and private sectors, we are helping people realize that if we all work together we can save the re- sources that make our area so special.”